The Jarvis Family and Other Relatives

If you have reached us from Ancestry.com or another cached site,
please go to http://www.fmoran.com/fletch.html to see the latest version of this page.
We welcome comments and inquiries. Please write us. 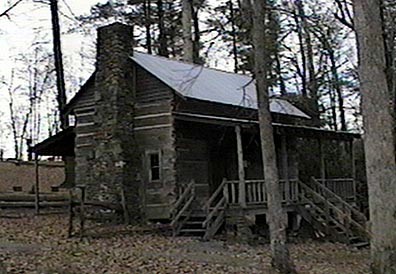 Photo of old home on exhibit at the Outdoor Drama, "Horn in the West" in Boone, NC. Very similiar to Enoch Fletcher's home.
James Fletcher received a grant in March, 1779 for 400 acres on the south side of the Yadkin River near the Moravians lower line opposite an island below the mouth of Cub Creek. By 1787 he owned 2054 acres which included 1034 acres of "western land" and was the only Fletcher that appears on the tax list. James married Susannah (probably his second wife) about 1743. It is believed that James Fletcher was born about 1725 in Fauqueir County, Virginia.

Captain James Fletcher was one of five delegates elected to the Consititutional Convention in 1778 along with Col. Richard Allen, Col. William Lenoir, Captain John Brown and Captain John Herndon.

January 1792 - James Fletcher prays reimbursement for money advanced ($920) in January 1779 and March 1780 to Charles Gordon, Colonel of the Wilkes Regiment of Militia, for the purpose of securing supplies for drafts from the regiment to the aid of South Carolina. Referred to Committee, 7 January, 1792. The NCGJ, Volume II, No. 3, July, 1976. This request was denied and was outstanding when James died in 1805. James Fletcher's Will

*After the death of James Fletcher, Sr. his widow, Susannah Fletcher married Bernard Franklin on 2 Feb. 1807

1808 Feb 18 - Wilkes Co., NC - Shadrack (Shadrak Franklin is the step-son of Susanna Fletcher Franklin above) bought 740 acres on the Brushey Mountain adjoining William Fletcher and Roberts for 100 pounds from Richard Allen agent for Benjamin Yeargin. Witnesses were William Rouseau and William Yeargin. 1808 Oct, Deed proved by Richard Allen. (Which William is this? Could be William, son of James Jr. if he has come of age.)

Who are James Fletcher, Thomas Fletcher, Thomas Fletcher, Sr. and William Fletcher found on the 1818 Scott County, VA. Census? Update: (This is probably the family of Thomas A. Fletcher, b. ca 1746, of Pittsylvania Co., VA who also had brothers William and Benjamin. He lived in Scott Co. in 1833, but moved to Hawkins Co., TN in 1839 and died there in Feb. 1843 at age 94 years.) He served in the Revolution and was pensioned. Second Generation: (This is not the family of Thomas Fletcher, son of James Sr. This is the Rev. Thomas Fletcher's family. Thomas was born in 1762 in Glouchester Co. VA. and served in the Revolution. He was pensioned (#S-8483). His Will is in NC Will Book #4, Page 190 and is dated 10 Feb. 1835 and proved in May Court Sessions, 1835.)

The Will of Thomas Fletcher was located in Fauquier County, VA Will Book 2, page 283. The abstract reads as follows: I Thomas Fletcher of County Farquier, sick but in perfect sense and memory make my last Will. To my son John Fletcher all my effects conditionally that he is to take care of his mother, brothers and sisters as if I were present. If anything remains it is to be equally divided amongst my children. All debts to be paid by said John Fletcher. I appoint Richard Fletcher, John, and Thomas Fletcher (Jr.) executors of this my last Will and Testament. My Seal November 3, 1792. Thomas Fletcher. The Will was probated July 22, 1793. The Appraisment was dated 21 September 1793 and recorded in Faquier Will Book 2, Page 286 on 23 September 1793.

Previously we thought that the Spencer Fletcher (abt. 1788-1825) who married Rebecca Blount in 1810 in Muskingum Co., OH was the son of this Benjamin Fletcher. However, through DNA testing it has been determined that Spencer was not a son of this Benjamin. For additional information on the descendants of Spencer and Rebecca Fletcher contact Kathy Fletcher at fletchfam@kc.rr.com.

Joshua Fletcher was a school teacher in Wilkes County, North Carolina. He was paid $8 per month in 1845 for 4 months and 11 days. This was in the 46th school district. Amos Church, Sr., Michael Bumgarner and Stephen Bumgarner were the district committeemen.

2nd August 1830: "The condition of the above obligation is such, that whereas a certain Joshua Fletcher is charged with having a certain illegitimate child, begotten on the body of Margaret Laws. Now if the said Joshua Fletcher his heirs, executors &c. shall provide for the support and maintenance of the said child to the indeminification of the parish of Wilkes County and the county aforesaid; and shall perform such order as the Court shall from time totime make in the premises, this this obligation to be void, otherwise to remain in full force and virtue. (signed) Joshua Fletcher (seal) (signed) Spencer Fletcher (seal)

In 1841 Spencer Fletcher enrolled two children in the Wilkes County, NC school system, District No. 14. The children are: John, age 6 and a female "R." age 8

Judgement against Spencer Fletcher to pay Rebecca Laws for her illegitimate child.
Spencer Fletcher, age 28, enlisted at Watauga County, NC as a Private on August 5, 1862 into I Co, NC 58th Infantry. He is listed as deserting to the enemy about June, 1863 and serving in A Co., TN, 3rd Mounted Infantry. He was born in Watauga Co., NC.

Spencer Fletcher apparently died before 1874. By then, Emmaline was married to Boon Deal and they had a son, Harvey Deal, who was 6 years of age. Mary, Martha, Jack and Clark Fletcher are listed as the step-children of Boon Deal.

Revisions and additions made February 17, 2006. Correction made with regard to Spencer Fletcher on July 24, 2006.

Return to the Jarvis Family Homepage